Whether you’d like to enquire about memberships, let us know about a technical issue, or simply say hello; please use the form below and we’ll reply as soon as we can! 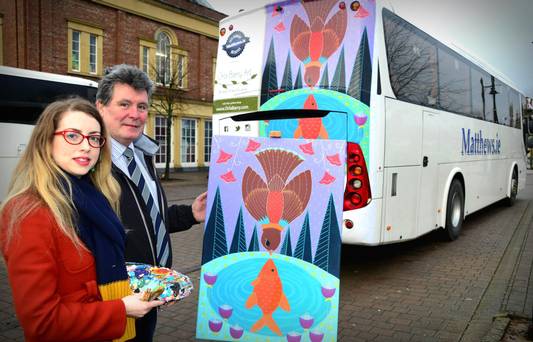 Matthews Coaches have begun an initiative to showcase the work of local artists where thousands will see it around the country- on the back of their buses.

Organised to celebrate the 20th anniversary of Matthews Coaches, this ‘Business to Arts’ initiative has received plenty of positive feedback as well as submissions. It’s set up on a competitive basis, with the winning piece from all the submissions being the one selected for display on the backs of the vehicles.

With the competition judged by representatives of Matthews themselves, as well as Creative Spark, Little Road Productions, Shabra Plastics) and local singer Sinead McNally, this year’s prize went to Orla Barry.

Orla’s piece ‘Meet Me Halfway’ was chosen in January to adorn the buses and she is the second artist to receive the honour.